These are the main changes in assumptions for this Update, compared to AEMO’s modelling in 2017 for the Electricity Forecasting Insights and Electricity Statement of Opportunities.

In late 2017, Lewis Grey Associates (LGA) provided AEMO with an updated CSG forecast, that incorporated feedback from the consortia of LNG exporters. The updated LGA forecast shows electricity consumption from the sector is forecast to increase slowly from 5,800 GWh to 7,100 GWh over the 20-year horizon under the neutral scenario.The updated forecast is lower than the previous forecast which was used in the 2017 ESOO (by approximately 700 GWh by 2036-37). It reflects improved estimates of energy (electricity and gas) used in the process of extracting CSG, made possible now that more historical information is available since operations began. In addition, the weak scenario explored a situation where international market conditions compared to local cost of supply leads to a potentially faster decline in CSG production.

The March 2018 forecast update uses an updated forecast for consumption by electric vehicles (EVs), compared to the one used in the 2017 ESOO. The new forecast is based on a mix of a consultancy report from Energeia commissioned in 2017 and a review of international trends in uptake of electric vehicles.
Based on the strong growth of EVs in key markets worldwide, AEMO has maintained the relatively strong growth in the forecast used for the 2017 ESOO for the first 10 years. After that, AEMO has adopted the growth rates from the 2017 Energeia forecast.

Compared to the previous forecast, EV uptake in the strong and neutral scenarios is now growing faster from 2026-27 onwards. The Neutral forecast now projects 14,500 GWh of consumption from electric vehicles by 2036-37. For the same year, the strong scenario projects 29,100 GWh, while the weak scenario has 4,100 GWh of consumption (identical to the previous forecast used). In terms of vehicle penetration, this equates to 19% of the light vehicle fleet being electric by 2036-37 in the neutral scenario, while the strong and weak scenarios reach 49% and 6% respectively that year. 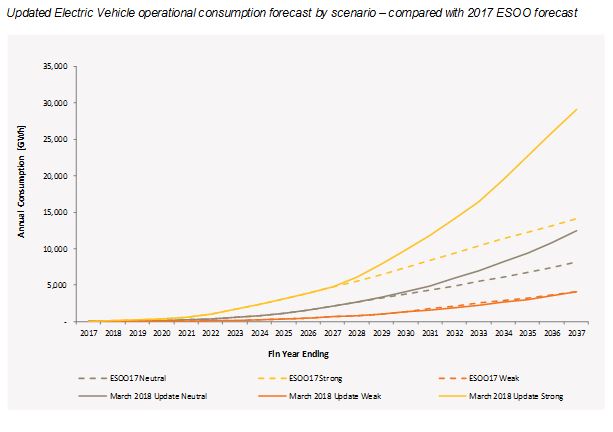 The wholesale electricity price outlook applied in this Update is lower over the next ten years than assumed in the 2017 ESOO demand forecasts, due to the observed high level of commitments for investment in large-scale renewable projects and government initiatives to lower prices for consumers. This lower price outlook is supported by observed reductions in NEM future contract prices and internal AEMO price forecasts.

Based on the updated price outlook, AEMO has reassessed large load closure risks, resulting in a lift in forecast consumption in Victoria in the Neutral scenario.

AEMO has updated the factors used to calculate auxiliary load (the load from equipment used by a generating system for ongoing operation) from internal estimates to estimates from by ACIL Allen. This has resulted in minor changes to reported ‘as generated’ forecasts.